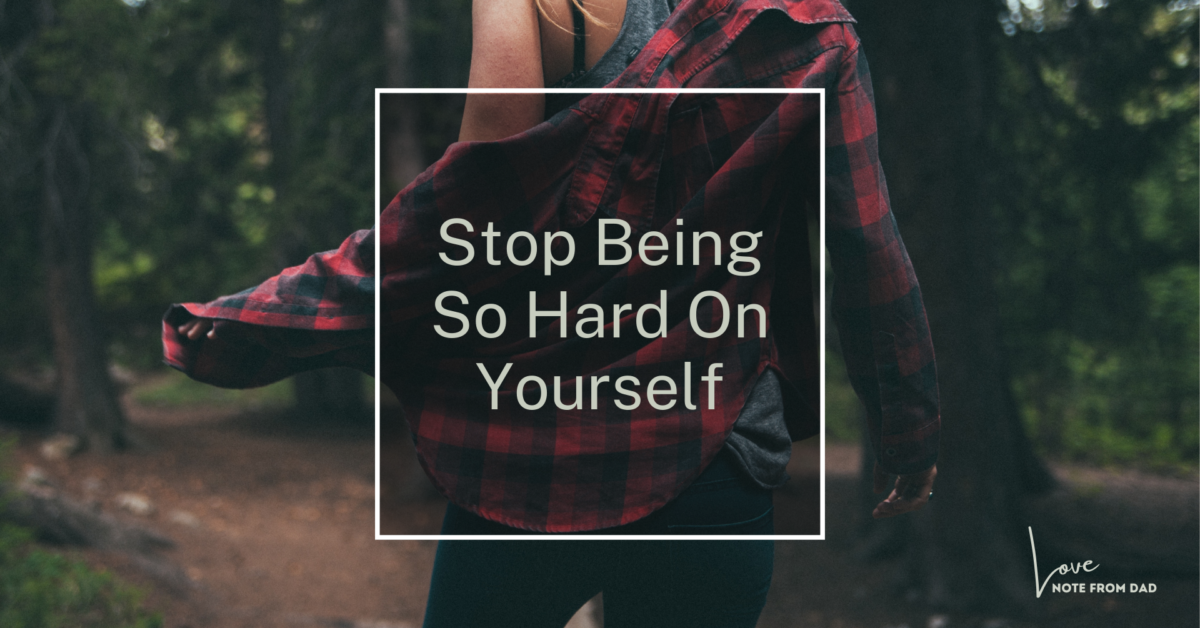 I am so proud of you.

Being your Father is My greatest joy! That’s why today I want to talk to you about something that is weighing heavy on My heart.

You are really hard on yourself sometimes.

The expectations that you have of yourself are not Mine. You’ve been allowing your performance to define you rather than My perfect love. Holding yourself to a standard of perfection that is Mine alone to achieve is futile. Instead of trying to be perfect, why not go ahead and just receive My perfection.

Your righteousness is a gift. It’s not dependent on your performance.

Your righteousness doesn’t fluctuate based on how you behave. It’s settled in Christ. I think it’s time for you to hear the Gospel again with fresh ears. In fact, I’d like you to hear it over and over again until the reality of who you are in Me is branded on your heart

I really do understand your struggle. The Gospel is simply so good it’s sometimes hard to believe.

But, My Kingdom is not of this world. My love is fearless.

I am not afraid of your sin. Your weaknesses do not intimidate Me. Your struggles don’t change My opinion of you. Why? Because I don’t relate to you apart from Christ. I don’t relate to your old, crucified nature. What Jesus did for you is real. You truly are a new creation.

I recognize that your mind has yet to catch up with what’s been done to you. I realize that your mind still needs to be renewed. The old patterns of thinking keep you trapped in a false identity. The old man, though dead, still controls your thinking at times. But don’t worry, Holy Spirit is a mind renewal expert. In fact, He’s been working around the clock to teach you who you are in Christ. He will finish the job!

I have a little homework assignment for you this week, if you are willing to spend the time with Me.

I’d like to read Romans chapter four to you out of the Message Translation at least once a day for the next thirty days. There are some things I want you to see from this chapter. I believe it will really bless you. But here’s the deal, when you sit down and open your Bible, don’t act like you are alone or the one doing the reading. Connect with Me, realize we are One, and let me be the One that reads it to you.

Holy Spirit and Jesus will be joining us too of course, so it is going to be amazing.

There is a lot you can learn from Father Abraham about receiving righteousness as a gift. And trust Me child on this, understanding that you were made righteous through the death, burial, and resurrection of Jesus will transform your life, and more importantly, your relationship with yourself. Which is really the point of all that I’m writing to you today.

What’s in My heart for you today is that you love yourself that way that I love you.

1-3 So how do we fit what we know of Abraham, our first father in the faith, into this new way of looking at things? If Abraham, by what he did for God, got God to approve him, he could certainly have taken credit for it. But the story we’re given is a God-story, not an Abraham-story. What we read in Scripture is, “Abraham entered into what God was doing for him, and that was the turning point. He trusted God to set him right instead of trying to be right on his own.”

4-5 If you’re a hard worker and do a good job, you deserve your pay; we don’t call your wages a gift. But if you see that the job is too big for you, that it’s something only God can do, and you trust him to do it—you could never do it for yourself no matter how hard and long you worked—well, that trusting-him-to-do-it is what gets you set right with God, by God. Sheer gift.

6-9 David confirms this way of looking at it, saying that the one who trusts God to do the putting-everything-right without insisting on having a say in it is one fortunate man:

Fortunate those whose crimes are whisked away,
whose sins are wiped clean from the slate.
Fortunate the person against
whom the Lord does not keep score.

Do you think for a minute that this blessing is only pronounced over those of us who keep our religious ways and are circumcised? Or do you think it possible that the blessing could be given to those who never even heard of our ways, who were never brought up in the disciplines of God? We all agree, don’t we, that it was by embracing what God did for him that Abraham was declared fit before God?

10-11 Now think: Was that declaration made before or after he was marked by the covenant rite of circumcision? That’s right, before he was marked. That means that he underwent circumcision as evidence and confirmation of what God had done long before to bring him into this acceptable standing with himself, an act of God he had embraced with his whole life.

12 And it means further that Abraham is father of all people who embrace what God does for them while they are still on the “outs” with God, as yet unidentified as God’s, in an “uncircumcised” condition. It is precisely these people in this condition who are called “set right by God and with God”! Abraham is also, of course, father of those who have undergone the religious rite of circumcision not just because of the ritual but because they were willing to live in the risky faith-embrace of God’s action for them, the way Abraham lived long before he was marked by circumcision.

13-15 That famous promise God gave Abraham—that he and his children would possess the earth—was not given because of something Abraham did or would do. It was based on God’s decision to put everything together for him, which Abraham then entered when he believed. If those who get what God gives them only get it by doing everything they are told to do and filling out all the right forms properly signed, that eliminates personal trust completely and turns the promise into an ironclad contract! That’s not a holy promise; that’s a business deal. A contract drawn up by a hard-nosed lawyer and with plenty of fine print only makes sure that you will never be able to collect. But if there is no contract in the first place, simply a promise—and God’s promise at that—you can’t break it.

16 This is why the fulfillment of God’s promise depends entirely on trusting God and his way, and then simply embracing him and what he does. God’s promise arrives as pure gift. That’s the only way everyone can be sure to get in on it, those who keep the religious traditions and those who have never heard of them. For Abraham is father of us all. He is not our racial father—that’s reading the story backward. He is our faith father.

17-18 We call Abraham “father” not because he got God’s attention by living like a saint, but because God made something out of Abraham when he was a nobody. Isn’t that what we’ve always read in Scripture, God saying to Abraham, “I set you up as father of many peoples”? Abraham was first named “father” and then became a father because he dared to trust God to do what only God could do: raise the dead to life, with a word make something out of nothing. When everything was hopeless, Abraham believed anyway, deciding to live not on the basis of what he saw he couldn’t do but on what God said he would do. And so he was made father of a multitude of peoples. God himself said to him, “You’re going to have a big family, Abraham!”

19-25 Abraham didn’t focus on his own impotence and say, “It’s hopeless. This hundred-year-old body could never father a child.” Nor did he survey Sarah’s decades of infertility and give up. He didn’t tiptoe around God’s promise asking cautiously skeptical questions. He plunged into the promise and came up strong, ready for God, sure that God would make good on what he had said. That’s why it is said, “Abraham was declared fit before God by trusting God to set him right.” But it’s not just Abraham; it’s also us! The same thing gets said about us when we embrace and believe the One who brought Jesus to life when the conditions were equally hopeless. The sacrificed Jesus made us fit for God, set us right with God.